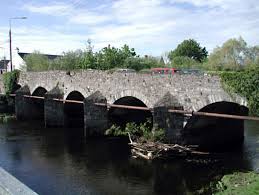 At the December 2019 Municipal District Meeting I requested an update on the progress of this project. The Council responded that that are awaiting National Transport Authority (NTA) approval and funding in order to progress to Part 8 and design.

The following documents outline the current proposal that will no doubt form the basis of an upcoming public consultation if approval and funding is granted by the NTA. The letter from the NTA indicates general support for the project which will cost in the region of 2.5-3m euro.

Because the Bridge is a listed building additional surveys and studies are required to assess the impact of the proposed cantilevered boardwalk. The Council are awaiting the reports and these were expected by the end of 2019.

Letter from NTA to Niall Morrissey, former Director of Roads, Transport and Safety in KCC with proposed costs of the project.